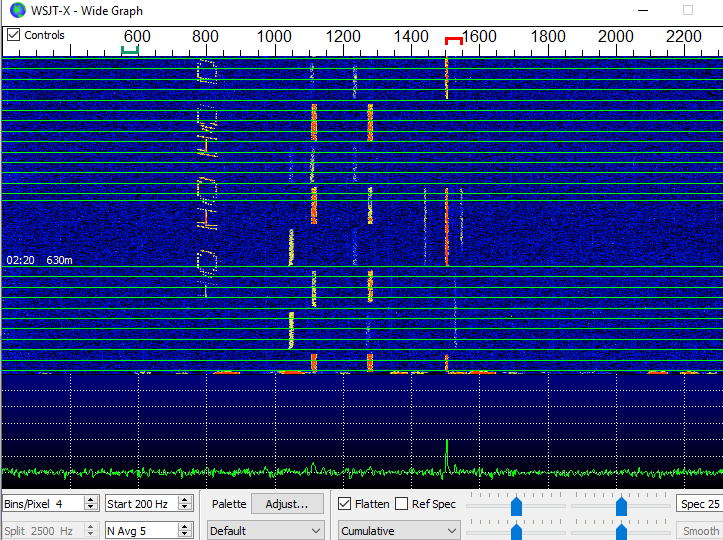 I decided to monitor the activity on 472 kHz tonight (630 meters). I fired up WSJT-X and saw that at least one station was in the holiday spirit.

Somehow, the transmitting station managed to send data that displayed “Ho Ho Ho” right in the waterfall, without any decoding.

It is nice to see that there are still surprises out there on the radio. They did seem to also transmit a callsign but it was not readable to me. Any ideas about who this Christmas elf is?

Between 1600 – 2015 UTC on August 21, 2017, as the solar eclipse swept across the nation, I captured much of the lower 2 MHz of the radio frequency spectrum.  I used a Microtelecom Perseus SDR, a 130′ inverted L with four radials, and lots of disk space.  In doing so, I have created a permanent record of this portion of the RF spectrum during the solar eclipse.

I am making the spectrum capture files available for your analysis and research.  Each file contains a 5 minute segment.  If you download a group of files, they will play in succession.

You can use the demo version of the Perseus software or any other software that can read the Perseus data, such as Linrad or HDSDR.  You cannot use just an audio player to play the files, even though they have .wav extensions.

Should you perform any analysis or otherwise make use of the files, I’d like to hear from you in the comments below.

Special thanks to Jav, K4JH, for donating the original hosting site and bandwidth for this effort and to the Internet Archive for their work in preserving content.